When I was staying at the Funky Flashpacker in Siem Reap, Cambodia, I met friends from all over the world. They hosted a magician to entertain the guests one evening. I captured what I saw in writing while my friend Gabriel Bouchard shot the below photos. What I’m really curious to know though; do you believe in magic?

Why? Because it was Magic

The crowd was huddled shoulder to shoulder, their eyes darting back and forth. Curious, confused, laughing.

Because it was magic.

His Irish accent rolled into his capacity to capture the crowds attention. When he moved, they moved. His clear voice portrayed honesty and responsibility, but became logically criss-crossed by his power of persuasion (of which he had an abundant ability).

The Khmer staff snuck out from behind the bar to watch. Their eyes-popping-open like when they watched the tourists spend hundreds on selfish and self-centered motives. The cards turned in ways that seemed fluid, in the way well thrown cards do. However, proceeding the cards being shown, all sense of understanding was lost.

The Finale, “Come on up, who’d like to be my final volunteer, and help me find the missing card?” The tall, lanky German shuffled the deck. Innocent, and chosen because of it; but where did his card go? How did he make it disappear? It was in his wallet, somehow sealed in plastic.

The six of clubs.

The crowd now excited, buzzing, interested, and talking amongst themselves. Drifting away in small groups back to the bar, or to order dinner.

Because it was magic. 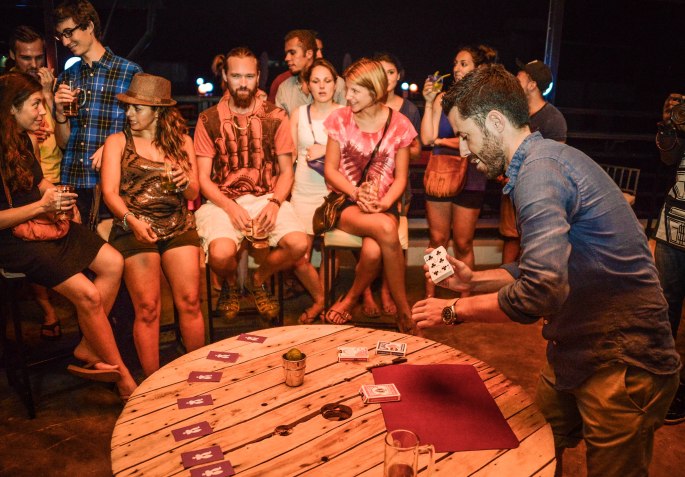 2 thoughts on “Why? Because it was Magic!”

#canadaskateboarding in Rome, Italy. @ryandecenzo holding court and discussing qualifying strategy with @mattberger_ @johnnypurcell @micky_papa
What an incredible experience! There were happy times, there were hard times. None of it was easy but all of it was worth it. #thankyouskateboarding
Tune in & stream the #2020olymoics Men’s street skateboard street. Starting soon!
#tokyo2020 with @canadaskateboard @mattberger_ , @damienmoroney
Ten year anniversary coaching skateboarders, and now #Tokyo for the #Olympics. Thank you to everyone who has believed in the journey. In the words of Robert Frost:
Rome… what a city eh!!
Back to work!
Well that was an interesting trip. Back in BC, heading to #bowyerisland to quarantine...
I kept getting these messages from the dentist telling me it was time for a cleaning.... #dentist #colombia #lockdown
Scenes from #Colombia 🇨🇴 #quarantine...
Congrats to Canada’s first Park Skateboarding National Champion 🏆@authenticandyanderson
The northern most point of South America #puntagallinas
Nice knowing ya #california... next stop #riodejaneiro !
Thanks so much to everyone who supported us out here at the @awbg2019 #teamcanada #qatar
@rayssalealsk8 — 11 years old. Getting the Brazilian crowd fired up at the woman’s final of the 2019 SLS World Championships in #saopaulo
Skance — so hot right now
The calm before, and after the storm — in #saopaulo #brazil
Beautiful Montreal, Canada... #cestbon
All kinds of interesting things in #China 🇨🇳
First photo of the legends, @tompenny and @authenticandyanderson hanging out together. You should have seen Tom’s reaction to Andys explanation and demonstration as to what his @powellperalta board can do!
Loading Comments...
%d bloggers like this: