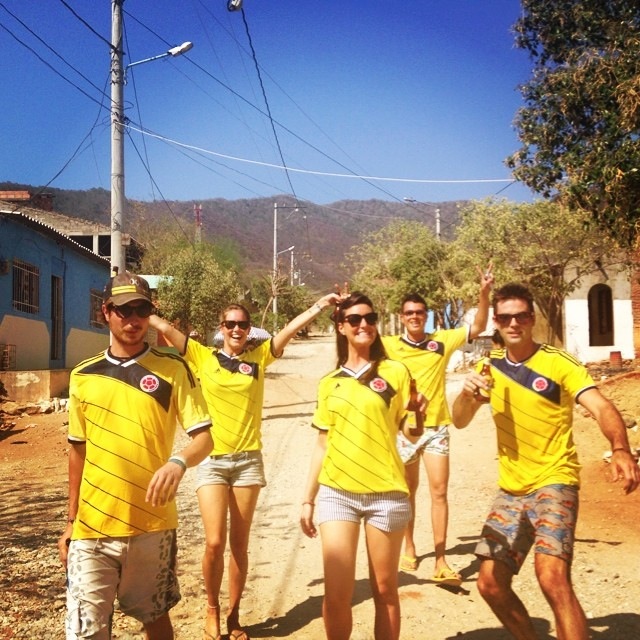 They were sitting on the grass across the street from him. It was dry now, but it wouldn’t be later. The rain always comes in the afternoon and most of the time it was after he had taken lunch. It never lasted long, and it never got cold enough to need a jacket, but every day the rain would come. It was something the man had come to expect and it didn’t bother him anymore.

There were two girls leaning against each other and two boys sitting on either side of them. A third boy was lying with his head in the lap of the girl who had jean shorts and a new tattoo. One of the boys, the one with the hat, stood up and began to lean to the right, then he leaned to the left, and then he fell down in the exact spot where he had been sitting. The group erupted in laughter and the man continued walking.

One of the girls was holding a beer and took the last sip before placing it on the grass beside her. She pulled out her cellphone and said something to the others while pointing at the man who was watching them. The girl next to her was playing with the hair of the boy whose head was in her lap. She looked up curiously at the man and he was already looking at her. From where he was, he saw the sun reflecting off her shiny, smooth and slightly tangled blond hair but he looked down when he caught her looking at him.

Beginning to walk a little faster he looked away and felt a nervous wave of self-consciousness wash over him when he realized they were talking about him. The only reason he had been watching them so closely was because he remembered the girl with the new tattoo. She had come in three different times last night, each time a little more drunk.

The girl with the new tattoo spoke with rapid, confusing English words and the man couldn’t understand anything she was saying. He liked her voice though; it was soft and clear, but also piercing in its honesty. Slowly walking along the sidewalk the man listened to the foreign words and wondered if he would ever learn English one day.

The group stood up together and looked towards him. He had no doubt anymore; he knew they were going to follow him and he walked even faster. Without stopping he bent down to pick up an empty beer bottle from the sidewalk and stole a quick glance towards them.

Across the street he saw one of the boys grab hold of the one who had been lying down and pulled him to his feet. The two girls stood beside them adjusting their shorts and tops. When the third boy stood, he put his arm around the girl with the new tattoo, but she slid out from under his arm and turned around to face him. Grabbing both his hands she started skipping backwards leading him, and the group, playfully across the street.

The man saw that they were getting closer when he looked back. He used his good hand to help him climb the short staircase. He stubbed his toe and stumbled, but kept hold of the railing along the stairs. At the top of the stairs he reached out and threw the beer bottle he’d picked up into the trash. The group had almost crossed the street when he looked again and suddenly he felt rushed.

I wonder how long they have been waiting for me, he thought, reaching into his pocket and pulling out a big key ring filled with keys of all shapes. He coughed a little to clear his throat, then bent down on one knee to open the giant padlock attached to the bottom of the metal door. He jiggled the padlock loose and with a surge of effort slid the metal door upwards. As it rolled up, it clicked loudly at each fold. He stood back up and tried to find the other key he needed to get inside.

He slid the key into the deadbolt and turned it counterclockwise until the bolt slid back into the lock. Swinging the door open made the bell, which was attached to the hinge of the door, jingle cheerfully. The sound of the bell had been burned into his memory and by this point in his life it gave him a feeling like deja vu every time he heard it. Before stepping inside he slid a rock across the ground with his right foot to hold the door open. He looked back over his shoulder one last time and shuffled inside as fast as his old body would let him.

The group jumped up the stairs cheering. The beer store is now open.

Back to work!
Well that was an interesting trip. Back in BC, heading to #bowyerisland to quarantine...
I kept getting these messages from the dentist telling me it was time for a cleaning.... #dentist #colombia #lockdown
Scenes from #Colombia 🇨🇴 #quarantine...
Congrats to Canada’s first Park Skateboarding National Champion 🏆@authenticandyanderson
The northern most point of South America #puntagallinas
Nice knowing ya #california... next stop #riodejaneiro !
Thanks so much to everyone who supported us out here at the @awbg2019 #teamcanada #qatar
@rayssalealsk8 — 11 years old. Getting the Brazilian crowd fired up at the woman’s final of the 2019 SLS World Championships in #saopaulo
Skance — so hot right now
The calm before, and after the storm — in #saopaulo #brazil
Beautiful Montreal, Canada... #cestbon
All kinds of interesting things in #China 🇨🇳
First photo of the legends, @tompenny and @authenticandyanderson hanging out together. You should have seen Tom’s reaction to Andys explanation and demonstration as to what his @powellperalta board can do!
Great weather and skateboarding in London this week....
🌅
Mini ramps are fun. Especially when you’re watching @authenticandyanderson at the #ocdskateshop in #melbourne
#melbourne
My skateboard brought me to Australia! Have you ever had such a friend as this ol wooden toy?
#tampapro is live on their website. This is how @authenticandyanderson likes to stay warmed up before his runs.
Loading Comments...
Comment
×