This is my first play, It is written in a style I like to call True-Fiction, a fusion of creativity and real events. Currently I’m in Sihanoukville, Cambodia and would like to thank Darko Kos, Sonia Sakhi, Dez Price, Tyler Thomasson, John Minns, Brennan McClay for their consistent guidance and support while I travel and write. Without it I couldn’t have written my first play. Dedicated to the girl in a hostel, who was sitting on a bench and editing stacks of paper for hours on end. I couldn’t help but ask her what she was doing. She clearly wasn’t checking her Facebook. Aine Ryan turns out to not just be the girl on the bench, but a “Kitty in the Lane”, as her massively successful play is titled. It wasn’t my first Irish friend, but my first playwright and she inspired me to write a play called…

Making friends (and enemies) in Thailand

Big cushions set around small tables on the edge of a tiny dance floor, in the middle of a small bar. A Deep-House song plays from two speakers on each side of the dance floor. Half the patrons dance while the others sit at the bar, or around the small tables.

The Bar Staff serves tourists sitting at the bar and wave at Albert, Friend #1 and #2 as they walk into the bar. Albert steps into the DJ booth and his two friends sit down at the bar to order drinks. Moving his shoulders along with the music Albert looks up to see Three Blonde Girls walk in and sit down at a table.  Friend #1 walks up to the DJ booth with two drinks.

Friend #1 – Back home, there’s no way we could have done what we did today.

Albert – That’s why being in places like this is so fucking awesome.

Friend #1 and Albert raise their glasses as the song builds toward a thumping hit of bass. The Bar Staff stretches across the bar with looks of apprehension on their face and see the two drinks being raised higher and their arms falling heavily together, cups clashing. Some of their drinks spill onto the dance floor and Albert and Friend #1 try to regain their balance. Friend #1 goes to sit at the bar and Albert steps back into the DJ booth.

One of the Three Blonde Girls is standing and talking to Friend #2 at the bar and walks away carrying three drinks. With a condemning look she sits down with her friends and points her finger at Albert. Friend #2 leaves the bar and dances up to the DJ booth. Albert is dancing in a full-body boogie.

Albert – A couple Aussie’s I used to live with, Cut Snake, they fucking rule! – Points at the Three Blonde Girls – You talked to those girls since they came in?

Friend #2 – Only one, she came up to the bar and asked me to buy her a drink.

Albert – I have, great people! (steps back into DJ booth and covers one eye with his hand to stare intently at the controls, then leans back towards Friend #2)  I’ve got just over a minute until this song ends. Want to go talk with them?

Albert and Friend #2 walk over and sit down with the Three Blonde Girls. Albert turns to Demon Whore to begin a conversation. Friend #1 stands up and his barstool falls backwards.

Friend #1 – It’s 50 cent beers buddy, I’m pretty sure you can afford it. (looks the Cheap Tourist up and down)

Friend #1 – You’re either a cheap fuck, or a poor bastard. This is the cheapest beer I’ve ever had.

Cheap Tourist – You ever been to Laos, you can get a bottle of whiskey for one dollar.

Friend #1 – We in a bar in Thailand, you’re being a cheap fuck. You know what buddy, here, (Reaches out to pass some bills to the bartender) let me to pay for this one. Keep the change.

Cheap Tourist – Like hell I’m going to let you call me a cheap fuck! My parents are rich! (Takes a wild punch at Friend #1)

Friend #1 – (Ducks under punch and puts Cheap Tourist in a headlock) This just proves my point.

Albert jumps up from talking with the Three Blonde Girls and runs across the dance floor. He slips on the spilled drink and his hat falls off, sparkling under the disco ball. Friend #1 remains arguing with Cheap Tourist at the bar.

Albert picks up his hat and gets to the DJ booth just before the song ends.

Hitting a few buttons a saxophone plays into the high-hats of the previous song and next a bongo drum starts bumping from speaker A to Speaker B. The people on the dance floor begin to step from side to side and a full percussion rift is added. The people on the dance floor start tapping their feet and the song’s tempo increases. They begin to shake their hips as well as bang their feet. The sound drops dead and then comes back fully developed, now sounding like a Latin influenced House song, brought together by a tropical Spanish vocalist. Everyone in the bar runs in to join the dance party.

The Bar Staff look confused, they want to dance but know they must stay behind the bar. The Bar Owner jumps out from a small door next to the DJ booth to see why there’s so much commotion.

Pretty Tourist walks into the bar and takes the Bar Owner by the hands and leads him onto the dance-floor.

Only the Three Blonde Girls remain seated. They are mostly glaring, but sometimes laughing at people. Demon Whore walks over to the bar and begins snapping her fingers, trying to get the attention of the Bar Staff. Albert see’s her standing alone and dances through the crowd to talk to her.

Albert – Look, just because I don’t agree you could have sex with any guy in here doesn’t mean you have to be a rude.

Demon Whore – You look like an idiot in that hat.

Albert –  A Thai lady named Darling gave it to me as a present today.

Demon Whore – Well I think you look like an idiot. (Demon Whore steals Albert’s hat from his head and puts it on.)

Albert – (Albert reaches into his pocket and pulls out his cell phone.) I want to make you famous.
Demon Whore – Famous for what?

Albert – Famous for having the worst attitude of any backpacker I’ve met.

Demon Whore – How are you going to make me famous?

Albert – You’d love it if I gave your narcissistic ego the attention it desires, wouldn’t you, I doubt I’ll waste my time but I do want digital evidence of you stealing my hat. (take’s photo)

Friend #1, and Friend #2 step away from the dance floor to join Albert at the bar. Demon Whore sneaks back to her friends wearing Alberts hat. The Bar Owner is behind the bar with the Pretty Tourist and pours them all a round of shots. The Bar Owner refuses Alberts money and a new DJ steps into the DJ booth . While Friend #1 and Friend #2 high-five the Bar Staff, Albert tiptoes up to Demon Whore who is talking about herself. He takes his hat back without her noticing and leaves the bar with Friend #1 and Friend #2.  — END ACT 1 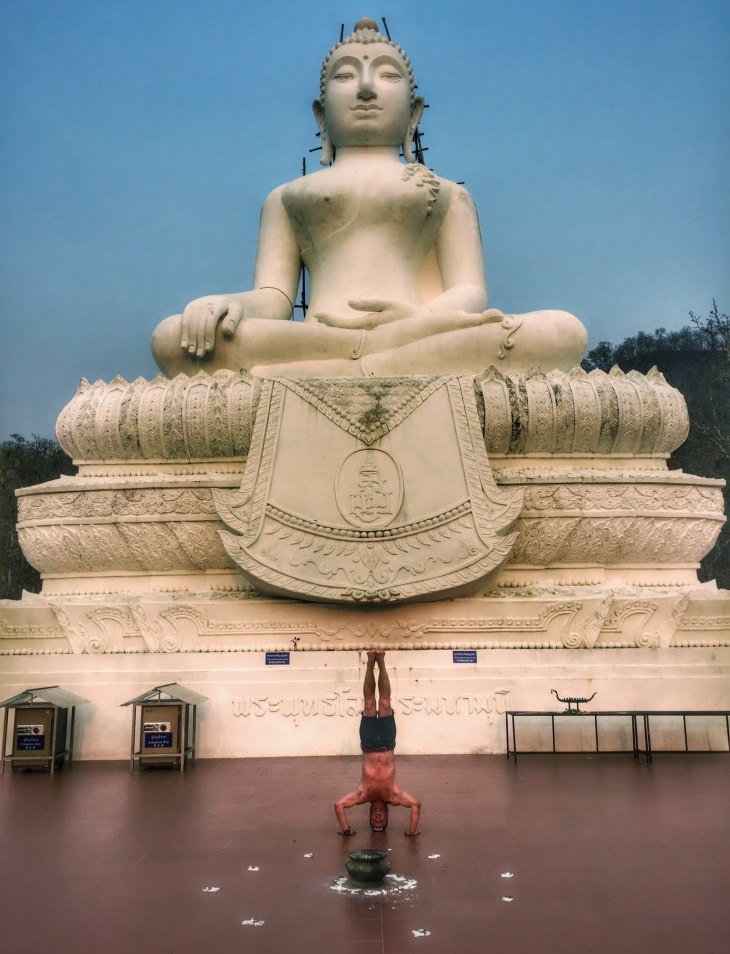 Later in the night Albert and Friend #1 stand outside a shop and watch Friend #2 buying liquor and cigarettes. Laughing, they have their arms around each other when Demon Whore walks up behind Albert and taps him on the shoulder.

Demon Whore – Can I speak to you for a moment? (Flutters eyelashes)

Albert – About what? (Steps back with suspicion)

Demon Whore – Just come here, I want to talk to you about something. (looks up innocently)

Demon Whores takes Albert’s hand and leads him behind a parked van.

Albert – (earnest face) Why are you such an angry person?

Demon Whore punches Albert in the face. He bends over laughing and Demon Whore continues to lightly assault him. Friend #1 runs across the street and pulls Demon Whore away from Albert. Albert can’t stop giggling until he realizes his hat is torn apart. Friend #2 walks out of the store.

Demon Whore – Your friend’s going to make me famous.

Demon Whore – For being the girl that beat him up, oh yeah! (fist-pumps with one arm)

Albert – (Laughing) Are you kidding me? How am I going to win a fight with a girl, especially one that punches like you.

Demon Whore – What are you trying to say? you’re not even blog-famous?

Friend #1 and Friend #2 begin laughing along with Albert and they turn and walk away from Demon Whore. Demon Whore mutters to herself and turns to stumble away. The lights in the shop go out and the shop owner closes the window shutters. THE END 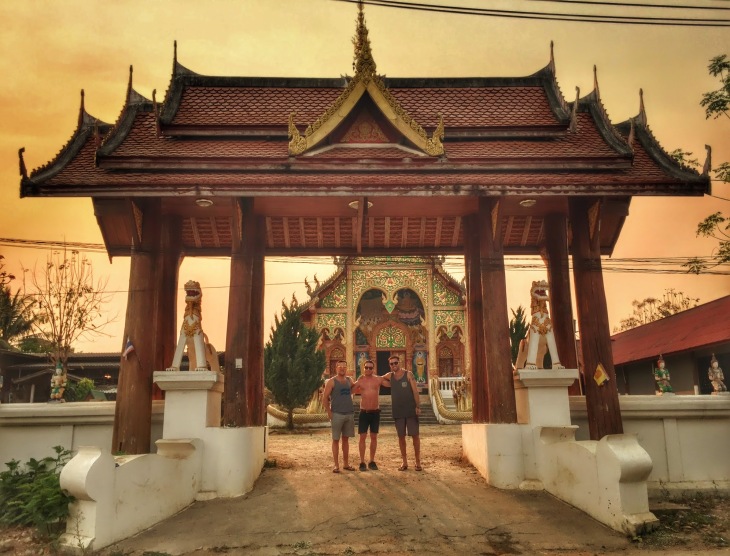 Click here to check out my book, Five Weeks in the Amazon… Unlike this play, it is a completely true story.

Nice knowing ya #california... next stop #riodejaneiro !
Thanks so much to everyone who supported us out here at the @awbg2019 #teamcanada #qatar
@rayssalealsk8 — 11 years old. Getting the Brazilian crowd fired up at the woman’s final of the 2019 SLS World Championships in #saopaulo
Skance — so hot right now
The calm before, and after the storm — in #saopaulo #brazil
Beautiful Montreal, Canada... #cestbon
All kinds of interesting things in #China 🇨🇳
First photo of the legends, @tompenny and @authenticandyanderson hanging out together. You should have seen Tom’s reaction to Andys explanation and demonstration as to what his @powellperalta board can do!
Great weather and skateboarding in London this week....
🌅
Mini ramps are fun. Especially when you’re watching @authenticandyanderson at the #ocdskateshop in #melbourne
#melbourne
My skateboard brought me to Australia! Have you ever had such a friend as this ol wooden toy?
#tampapro is live on their website. This is how @authenticandyanderson likes to stay warmed up before his runs.
Yo extraño #Taganga ❤️
Went to meet some friends in Venice beach...stopped for a photo, pretty pretty.
Moto adventure in La Guajira with @brennan.thekid.clay #colombia vamos para #miciudadriohacha
The indigenous people from the northern point of Colombia have a uniquely artistic and colorful way of expressing themselves — #riohacha
A room with a view at #casarelaxhostel in #minca after an afternoon moto ride...
Afternoon fútbol match in #Taganga
×
%d bloggers like this: